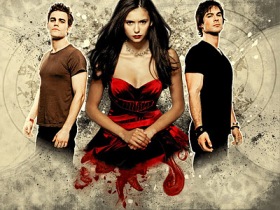 So…don’t burn me…but I’ve started watching “The Vampire Diaries”. More specifically, I watched the first episode of Season 1 and then skipped to the thirteenth (“Daddy Issues”) and fourteenth (“Cry Wolf”) episodes of Season 2. And here’s the reason: Stephen Amell of “Arrow” fame guest-starred in those two episodes. While he makes a HOT vigilante on “Arrow”, he also made a pretty yummy, though cruel, werewolf in “Vampire Diaries”. Granted it was only for two episodes and then he had his heart ripped out by a vampire but, still, I enjoyed it. He had enough of a part to make it worth my while to sit for two episodes and watch. And since then…I’ve just let it play. I’m mostly following the Klaus/Sun-and-Moon curse plot, though I’ve been paying more attention to my daughter, truthfully. But it’s worth the designation of good background noise.

When I was a teenager, I definitely went through my vampire phase. I read Interview with a Vampire, fantasized over handsome, mysterious, tortured souls, and watched “Forever Knight” and “Highlander: The Series” (Immortals are just as good as vampires, if not better) with rapt attention and fervor. Like any teenage girl, I found the idea alluring, even romantic. Star-crossed lovers, forbidden intimacy, blah blah blah. I got over it, of course. While I still love the gothic stories (hey, I focused on Gothic Literature for my Masters, for pity’s sake), I like to think I’m a little more mature now. ^_~ When my students first introduced me to the idea of Twilight, I about had an aneurysm at the words, “He’s a vampire but he’s a vegetarian vampire.” Wait, WHAT NOW?

“And he sparkles in the sunlight.”

Needless to say, I have never read the books nor will I ever. “The Vampire Diaries” is the closest I’ll ever get to that kind of vampire fluff, thank you very much. Yes, I’m a snob, what of it?

And, of course, the thing I love the most is that the path to “The Vampire Diaries” chorused through one of my other levels of geekery: comics. The only reason I watched it is because I couldn’t get enough of Oliver Queen. LOL Fun times all around!