Oh, those words! How they stir my heart each time! Today has been a day of awesome firsts and dreams come true. Today, I voted for only the second time in my life but for the first time in a presidential primary. If you’re wondering, I voted for Bernie Sanders, though, if Hillary Clinton gets the nomination, I will definitely turn out for her in November. 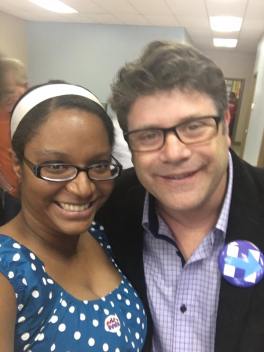 After voting for Bernie, I made my way to the local campaign offices for Hillary Clinton and hung out there for a while, with a singular purpose. Sean Astin was to be campaigning through our state today for Hillary and I have wanted to meet this extraordinary man for most of my life but especially the past sixteen years. Like most of my peers, I have grown up watching him on the silver screen, but it was his portrayal of Samwise Gamgee in Lord of the RIngs that has filled and stuck with my heart and soul. Sam is a character to whom I would dearly love to emulate in my lifetime. A dear friend calls me “her Samwise” and I strive every day to be worthy of that moniker.

After chatting with folks at the campaign headquarters and playing with my daughter for a little bit while we waited, Sean arrived with Senator Joe Donnelly and worked his way through the small waiting crowd, shaking hands, taking pictures, and signing autographs. He took a moment to laugh and proclaim, “I’m just going to dance with the kids,” and then proceed to do so with my three-year-old daughter and her new little friend who were bouncing around him little Tookish little hobbit children.

When it was finally my turn, I shook Sean’s hand, said how wonderful it was to meet him, and asked if he would sign my copy of Forgotten Leaves. I explained that the book contained my first academic publication, an essay on Tolkien’s heroes. I’m sure I babbled more than a bit as I tried to explain how I had examined all of Tolkien’s heroes with their differing characteristics, triumphs, and failures, and had found Samwise to be the one who 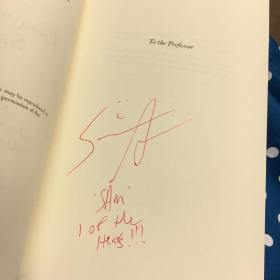 most embodied the traits that Tolkien considered the embodiment of heroism: loving service, loyalty, devotion, and sacrifice. Being as self-deprecating as the character he so brilliantly and lovingly portrayed, this dear man signed my book “Sean Astin. “Sam”, 1 of the heroes”. Fittingly, he signed on the dedication page which simply says “To the Professor”, which I thought was amazingly appropriate.  After taking a photo with me, Sean pointed at my “I Voted” sticker and exclaimed, “At last! I’ve been all over this state today and this is the first one I’ve seen anyone actually wearing! Well done, you!” That sticker now resides in my journal where I will recount today in all my geeky joy with more than a few squees in bold letters on the page.

And did I mention that he tweeted back at me a little while ago? Squeeeeeee! It’s been a really, really good day! I have to smooch my hubby extra much to thank him for alerting me to all of this going on today so I could be a part of it. 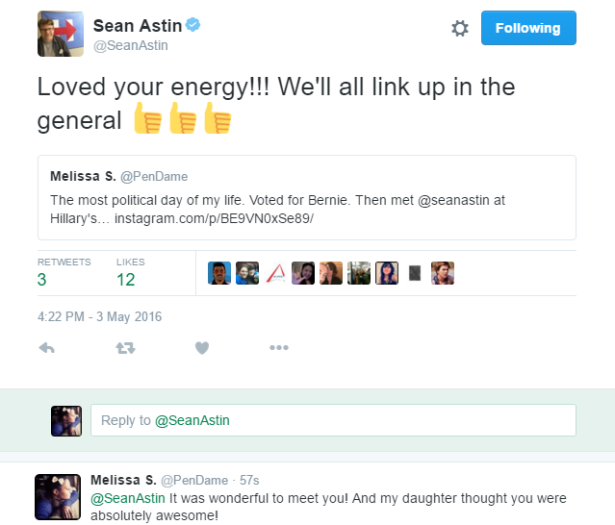 Snyder, Melissa. “He Who Would Be First Must Be Last: Tolkien’s Heroism in Lord of the Rings.” Forgotten Leaves: Essays from a Smial. Eds. Jessica Burke and Anthony Burdge. Staten Island: Myth Ink Books, 2015. 7-28. Print.