This past Friday, I stood up in the church and community that I grew up in and spoke to the 2016 graduating class of my old private school. I stood up almost on the same spot where, sixteen years ago, I had given the valedictorian address for the graduating class of 2000. At thirty-three years old, I stood up to give these graduates whatever guidance, admonishment, and encouragement I could.

Yep. I felt totally unqualified to perform this task, but I did it anyway. Let me start at the beginning.

The night began in darkness. I am not joking. As we prepared to leave for the graduation ceremony, everything in my parents’ house shut off. My mother groaned.

“Tell me this isn’t another power cut!”

My father echoed from the bathroom, in a rueful laugh, that he hoped that it wasn’t over by the church, too. Graduation was being held at our church.

We finished getting ready and headed out, fingers and toes crossed for Dad’s hope to be correct. It wasn’t.

The church was dim and rapidly darkening as the evening deepened and warming up from the crowd already gathered and those who were still arriving.

To stave off shadowy escapes and explorations of the large, dark building, I sent my husband into the dark nursery with our three-year-old daughter, who has night vision like a cat. I then waited with my Marmee to see what would happen. We soon heard that it wasn’t just our neighborhood or even our district. This was an island-wide power failure!

Thankfully, however, we heard on the heels of that news that several districts were already reporting power being restored as it worked its way from the far side of the island to ours. They estimate that it should be back on by the time that graduation was supposed to commence (see what I did there?).

So we waited and watched our pastors and family friends rush hither and thither, and wishing that they would just sit down and take a break because there was nothing anyone could do at this point but wait.

People continued to arrive and the church, now glittered with cell phones and flashlights here and there, continued to hot up. I ducked into the nursery to investigate my daughter’s shrieking and settled her with her favorite Lilo and Stitch movie before emerging again. Marmee and I continued to wait. The students came in to fetch the flags and the Bible for the graduates’ entrance but there was still no light to see well by. We just concentrated on staying out of the way but where we could hopefully figure out if something was going on.

Then the piano started to play. Pomp and Circumstance. Marmee’s brow furrowed.

Then the doors opened and the students processed in with the flags.

Marmee realized that they were going to go ahead and get started with graduation even though the power wasn’t back yet. The thing was, they were starting the procession in and we were supposed to be in line, her as vice-chair of the school council and me as the commencement speaker. So we slipped out into the foyer. After being jostled and tugged into my place, I walked in behind the representative for the Minister of Education and then sat up on the platform next to a local politician from whom I had grown up on just the next street over.

As we sang the national anthem and then our national song acapella, the lights suddenly came back on, to delighted gasps and applause, though the singing never stopped. I’m rather proud of the fact that I still knew all the words to the national song despite not having sung it, or even heard it, in sixteen years.

I realized something, though. I realized then (again) how much I hate sitting up front. I really do! It makes me very self-conscious to be on display like that. Not a good thing when you are about to be a keynote speaker, right? So I let myself hyper-concentrate on the people who spoke before me and just stare at the backs of their heads. As the time grew closer, I could feel my pulse start to hammer and told myself that I was going to do the opposite of what my nervousness would have me to do. I would slow down in my speaking rather than speed up and let my nervousness wind me. I know myself well enough to at least know that.

By the time I blushed my way through the introduction that a former principal made for me, I had breathed myself a bit calmer and, as I stepped up the podium, I allowed myself another breath in silence and a smile before I began to speak.

This class’s theme was “Greatness Takes Time”. As I worked on the speech the week before, I found myself writing about big and small greatness and admonishing these graduates to not be afraid of being small, a lesson that has stuck to my soul ever since I read Emily P. Freeman’s book Simply Tuesday, which espoused the deep-hearted idea of being small and thriving within it. As I thought about this concept and what it has meant to me over the past few months, I found my writing blooming and blossoming into something I had not planned: 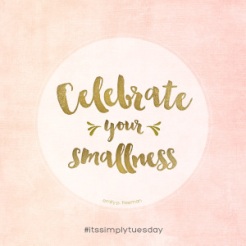 Thank you, Emily P. Freeman, for your wonderful, heart lifting message, and I hope that I passed it along adequately.

“Some of us are built for big greatness: for people and leadership, for large stages and wide reaches. Some of us are built for small greatness: for living rooms, porches, and kitchens to hold conversations, for classrooms, offices, and the unseen tasks and late hours. […] In a society that elevates a go-go-go mindset and equates wealth and a high profile with success, with greatness, I encourage you not to be afraid of being small. Big greatness can change lives, yes. So can small greatness; it can also save souls.”

“Love is greatness and yet, in this world, love is surprising. As you leave this place, I encourage you, I implore you, as you seek that path to greatness that God has for you, do not forsake the greatness of love. Christ didn’t. He sat and talked with the ostracized, healed the avoided, blessed the shunned with kindness and care, and set forever the example of greatness that we all are called to follow. Greatness takes time. Do not forsake the work of greatness, big or small, but also do not deny the grace of greatness.”

If you would like to hear my entire speech, you can listen to it here. All I hope that there will be something in it that will soothe and be a golden ember that you can hold to your soul as you endeavor in your own way to make this world a better place on your path to greatness.