Last week, I rode a high brought on by the spectacular live performance of Jesus Christ Superstar that aired on NBC’s network on Easter Sunday, starring John Legend, Sara Bareilles, and Brandon Victor Dixon. I had never seen a production of JCS or listened to any of the soundtrack before, so this was an entirely new experience for me. Godspell I was familiar with, but I had never gotten to know JCS, although I knew of it.

All last week, the strains and melody of “Everything’s Alright” were the undercurrent of my days. I even found myself singing the first stanza of the song to a student who was nervous and stressed about a test they had in my class. All week, this musical—this story of Judas, Jesus, and deep, soul-searing humanity—buoyed me up and kept me afloat. The actors’ faces have shown up in my dreams. Their voices have filled my quiet moments, my heart and soul birthing prayers from the lyrics they breathe and belt.

Jesus Christ Superstar has been a Godsend of a soul lift, one that I have needed deeply and dearly. It has been a difficult few months, emotionally, physically, and spiritually. I have felt heavy, off-center, not myself. Nothing has felt aligned—not my emotions, my prayers/time with God, my sleep, my libido, my energy, my reactions and responses, nothing. Often, all I want to do after a full day of teaching is hide in my room with my earbuds in and not speak or have to spend spoons on anyone. Of course, unfortunately, this means my family suffers from my lack of presence and being present. For weeks, it’s been this way, this off-centeredness, so to feel the buoyancy of this beautiful musical was nothing short of a miracle. As we head into a new week, though, I find myself fearing.

I fear the letdown. Buoyancy like this doesn’t last as the novelty becomes commonplace. I fear the shine falling off, the powerful lyrics becoming ordinary as I listen to them over and over. I fear that the off-centeredness returning, the heavy tiredness settling on my shoulders and sapping my spoons and energy. It is like the winter weather, which seems to refuse to let go as, morning after morning, now into April, I wake to snow on the ground where previously there was none. Like that unexpected snow, I silently worry that the low places will return, and I’ll crash back to earth again. That sudden stop hurts, like a lot.

This past weekend, as I embarked to the grocery store on my own (a rare thing), I kept my earbuds in as I did my shopping, humming and mouthing lyrics to JCS’s pieces, and there was a freedom there. A soaring amidst the mundane, and I realized how much I have missed it. I’ve missed feeling freedom. Freedom to be me and enjoy what brings me life and joy. Even though I am afraid that it won’t last, for now I will hold onto it. Hold onto that freedom, that soaring, those miracles amidst the mundane. I will keep on singing, sharing, and hoping that this is just the beginning of feeling like myself again.

I’m getting back into the practice of reading before bed. So here are my bedtime books for the past two nights:

You’re Never Weird on the Internet (Almost) by Felicia Day. I haven’t really been a big fan of Felicia’s before but I really enjoy her writing style. It’s bright and conversational and fun. Feels like chatting over dessert. 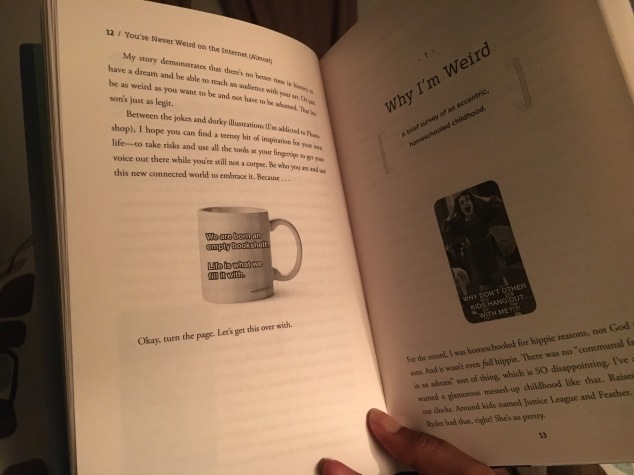 Hamilton: The Revolution by Jeremy McCarter and Lin-Manuel Miranda. This tome is big and beautiful and an utter delight. I am a process person so reading about Lin and Hamilton’s process of becoming is amazing. And his libretto annotations? Sheer joy!

So. It has finally happened. I have succumbed to the beat. I have been enthralled by the story lived out in music. I have been captured by history dusted off, shined up, and with new life breathed into it.

Yes, I am talking about Hamilton. After seeing the company’s performance at this year’s Tony Awards, I am officially a Hamilton fan. Lin-Manuel Miranda’s music is amazing and has swayed even my heart, which has never really been drawn to hip-hop as a first choice. I have listened to the soundtrack in bits and pieces, thanks to Pandora, and I have just finished on my first full run-through of the cast recording as I post this.

I must admit that I am drawn hard to the story/triangle of Alexander Hamilton, his wife Eliza Schuyler, and her

elder sister Angelica. The ladies’ main songs: “The Schuyler Sisters”, “Helpless”, “Satisfied”, “Take a Break”, and “Burn” tell a story of hardships and the pulls between head and heart, the decisions that are so difficult to make but that we make because we think them the best ones for our families, and even the selfishness of human emotion and ambition and its effects on those we love. Angelica’s introduction of Hamilton to Eliza–who is previously established as struck “helpless” by the familyless, penniless revolutionary–not only kept Angelica free, as the eldest, to seek her fortune through marriage but, as she points out, “At least I keep his eyes in my life.” But the drama doesn’t end there, believe me. Human lives are never devoid of such, after all. Act II will break your heart, by the by. I’m talking tears and tissues, people. As a friend recommended, don’t be driving (or really doing anything else) while you’re listening to Act II. Act I will make you dance. Act II will bring all the feels, break your heart, melt it back together, and shatter it all over again.

Lin-Manuel Miranda’s excellent song sets, lyrics, and composition beautifully tell this story of a “young, scrappy, and hungry” revolutionary and his contemporaries but also paint him as an ambitious and very flawed man. Eager to rise up from his obscure, tragic beginnings and make a mark upon the world, Hamilton takes his shot, often making his said shot, but also makes mistakes–grievous, damaging mistakes–as well as powerful moves in the development of this newborn country and has to live with the consequences of those mistakes, moves, and decisions, both in his professional life as well as his private one. Miranda has a way of writing conversational lyrics that flow almost like honey. Not thick or cumbersome but well-formed, belonging together, and intentional. They also beat and burst through your chest with anger, fire, frustration, passion, determination, courage, fear, and defeat. Every emotion on the spectrum is touched on and poured out in the cast’s voices and performance as they wend their way through Hamilton’s story and those of the lives of those he touched. As he lives and dies and they tell his story.

I am thoroughly enthralled, happily seduced by a new (old) story soaring in a tornado of music. I am so excited that people, especially young adults and children, are becoming so passionate about this show and the history that it represents and presents, as well as the 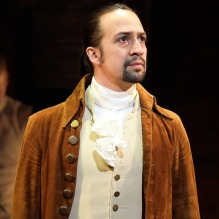 ceilings and barriers that it shatters in encouraging young actors and actresses to pursue whatever parts their hearts lead them to. I can only hope that I will have the privilege of seeing this fantastic show in person on its tour some day soon.

Now, if you’ll excuse me. *puts my earbuds in and presses PLAY*

Singing through Broadway tunes on my Pandora channel today and it got me thinking about my “Broadway dreams”, what I would love to do, given the chance (and the talent).

*Playing Lucy in a production of Jekyll & Hyde. It was the first musical I ever saw live in a theatre and my college was the first to produce it after it closed on Broadway/off-Broadway. It remains my absolute favorite to this day. Singing songs like “Nobody Knows Who I Am” and “Bring On the Men” always gets my blood going, and “A New Life” coaxes a power from my throat that I always think I have lost.

*Performing “The Cell Block Tango” from Chicago. I love that song, especially the way it is done in the film. The fearlessness of the women in their dance and their emotion, it’s like sheer power leaks out from them every time I watch that performance.

*Playing Jo in Little Women. I know that the show did not do as well as hoped but Sutton Foster’s voice and the beauty of the songs still stir love in my heart, and

echo my private little heart’s hope of being astonishing one of these days. And “Some Things Are Meant to Be” will always break my heart and make me sob.

*Dancing the “El Tango de Roxanne” from Moulin Rouge. I want to dance that dance, that’s really all there is to it. I want to dress in a corset, feel the power of the dance down through my feet and the grace and daring of moving in such gorgeous tandem.